The above worksheet is for the DVD available online.

WebQuest Mabo A Question of Rights 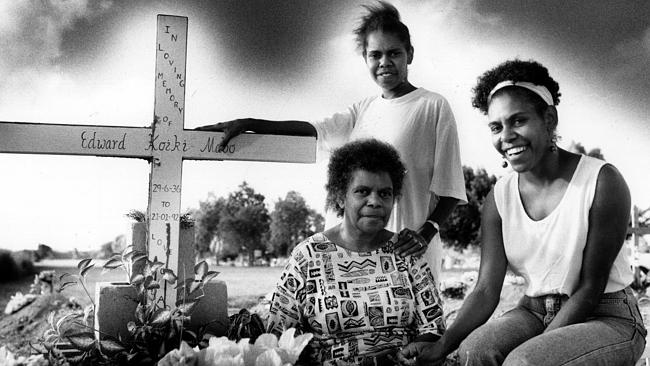 It is not appropriate that I include an image of Eddie Mabo in this article on VCE Legal Studies. I am culturally sensitive to Indigenous peoples in Australia and their beliefs on images of deceased persons. Having his family sitting by his original grave in Townsville promotes a good feeling about Eddie and his achievements.

The desecration of Mr Mabo’s grave at the Townsville cemetery in 1992 (on my birthday) still remains for me a low point in Australian History. That morning news on the radio has made me realise the level of racism that exists in Australia. That feeling exists in me today.

As students approach their final examination in VCE Legal Studies, several deficiencies in learning have become apparent. Whilst the excellent DVD ‘Mabo, Life of an Island Man’, covers many elements of the two cases, more explanation may be needed.

The Legal aid Funding of the Cases

Total costs over the decade in the Mabo case approach $1million. The plaintiff’s case was funded with Commonwealth Legal aid of some $700,000 paid by the Canberra based office of legal aid and family services from a special grant by the then Commonwealth Minister of Justice, Senator Michael Tate.

The meaning of Native Title.

To understand Native Title today you must link it to the Native Title Tribunal. Each claim from each group of Indigenous peoples is unique, just as Mabo’s original claim on Murray Island.

Native title describes the rights which Aboriginal people have to land and waters according to their customary laws, but viewed from and recognised by, the Australian legal system.

You can think of native title as a bridge between customary Aboriginal laws, which have existed for many thousands of years, and white Australian laws defined and observed by the invading British people.

Native title is tightly linked with a court case the Australian High Court had to deal with in 1982, called the Mabo case.

Native title and land rights are often used synonymously. While native title is an entitlement to land it does not cover the rights to that land.

“Native title puts traditional owners in a stronger position to negotiate agreements, manage their country, and set terms and conditions for access,” explains Kimberley Land Council acting chief executive Nolan Hunter . “As a result of native title, governments and industry will be required to sit down at the table with traditional owners to enter into agreements before anything is done on country.”

State and territories have the primary responsibility to resolve native title claims. The system is funded by taxpayers’ money, and there are no penalties if claims are unsuccessful .

Native Title [is] one of the most complex and slowest parts of the justice system.—Tom Calma, Aboriginal and Torres Strait Islander Social Justice Commissioner